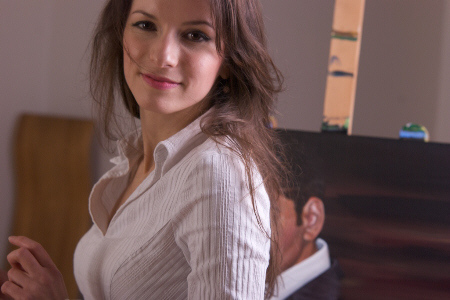 Harriet Muller was born in London to a Costa Rican mother and British father. She decided she wanted to be an artist at the age of 3 and started selling paintings while still at school. She studied Modern and Medieval Languages at Cambridge University where she was involved in the Cambridge Arts Society and her passion for art took her to Spain to study Fine Art at the University of Seville. There she was heavily inspired by Expressionism.

In 2005 Muller decided to broaden her knowledge in the arts and fly to Los Angeles to study acting for film. On her return she worked as an actress, most notably playing Raquel Clayton, a blind artist, in Akram Hassan’s award-winning film Bereft of Colours (2006). As human rights issues are very important to her, she produced the first play to be staged at Amnesty International’s Human Rights Action Centre in 2007. The production was Reader by the Chilean playwright, Ariel Dorfman. His work Exorcising Terror: The Incredible Unending Trial of Augusto Pinochet was the inspiration for her painting Aftermath of a Dictator. Muller has also worked as Assistant Art Director for the film In The Mix directed by Denis Lawson.

Harriet Muller has been working as a full time artist since 2008, painting and exhibiting her work as well as undertaking commissions. She has published a series of paintings in a book called Changing Lives (2010). She currently lives and works in Bournemouth and has been furthering her studies in oil painting under the direction of the artists Christiane Kubrick and Valerie Wiffen.

Images of all artwork © Harriet Muller.

Harriet Muller Art will use this information to send you news and invitations to exhibitions by Harriet Muller. You can change your mind at any time by clicking the unsubscribe link in the footer of any email you receive from us. Your information is kept confidential. Read more about our privacy policy. By entering your email address, you agree that we may process your information in accordance with these terms.

We use MailChimp as our marketing automation platform. By entering your information, you acknowledge that the information you provide will be transferred to MailChimp for processing in accordance with their Privacy Policy .